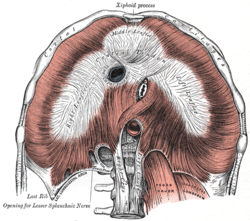 This is my 1st "guest" article on the blog. I asked my good friend, Mitch, who will teaching a muscle testing seminar for FIRE in October if he would write one related to dry needling and below is what he wrote! He set the bar pretty high, which is one of the things I appreciate about him.  Mitch is a very talented, caring doc with a knack for explaining things in simple terms to folks. I hope you enjoy it.

Too often the diaphragm goes unnoticed during diagnostic evaluations. Its primary function of respiration seems to overshadow other anatomical functions and physiological influences. As our knowledge of the human body evolves, thanks to collaborative researchers in the fields of physical therapy, rehabilitation, athletic training, chiropractic, and osteopathy, the diaphragm’s recognized impact beyond respiration is receiving stronger professional considerations for therapeutic applications.

Other critical contributions of the diaphragm involve:

To assess how we may approach influencing diaphragm function via dry needling, since we cannot directly gain access to its musculature, we must consider approaching it through its neurological innervation, fascial relationships and muscle co-activation patterns.

The diaphragm is innervated by phrenic motoneurons located within the ventral horn (lamina IX) of cervical spinal cord segments C3-C5 and receives information via presynaptic contacts in the medulla. Recent research suggests that the retroambiguus nucleus controls these medullary areas from the occipital area7 and that it is possible to influence the diaphragm from the occipital bone (8).

With this basic understanding we can approach the involved musculature to reestablish proper cervical innervation. This includes:

Further, accessory components of the phrenic nerve are derived from C5 segment and the subclavian nerve (C5-C6), in approximately 30% of dissected cadaver (9). Following anatomical relationships, innervation of the subclavius, being its origin is the first rib, potentially influences the scalene muscles inserting on this same location, with it receiving innervation from its C4-C6 nerve roots.

It has also been demonstrated that a brachial disorder can provoke phrenic and diaphragmatic disorders (7), thus any testing or signs implicating these nerve branches or thoracic outlet syndrome, we must consider their cervical levels and other muscles as possible culprits limiting diaphragmatic function. This directs our attention to include the pectoralis minor. It’s shortening can narrow the subcoracoid space creating compression of the neurovascular bundle consisting of the trunks of the brachial plexus and the subclavian vessels. Dry needling of these aforementioned muscles and their nerve root innervations can possibly aid in reestablishing diaphragmatic function.

Admittedly we have implicated the entire cervical column with diaphragmatic affect. Our understanding of trigger pint patterns, postural alignment, muscle testing and neurological and orthopedic assessment and patient history can aid us where to first apply dry needling.

In regards to the diaphragm’s interplay with digestion, quoting from Borondi’s and Zanier’s excellent paper on the diaphragm, we can grasp other neurological influences. “The phrenic nerve along its pathway anastomoses with the vagus. Recent studies suggest that the crural region of the diaphragm receives sensitive motor efferents from the vagus. During inhalation, if there is an alimentary bolus, the crural region stops working in order to send the bolus into the stomach. This probably involves distal inhibition of the phrenic nerve, deriving from crural vagal information (7).”

They go on further to elucidate, “It is generally believed that the esophageal afferents of the vagus exert an inhibitory influence on the medullary and phrenic motor neurons. If there is a problem in the diaphragm or phrenic nerve, the whole system that controls the crural region is negatively affected, causing esophageal reflux and/or swallowing problems.(7)”

Implication of the vagus nerve in diaphragmatic function directs our attention to its trajectory.  As it exits the jugular foramen, in close proximity to the occipital condyles, hypertonicity of the suboccipital musculature can create compression of the atlanto-occipital joints. Manipulation of this upper cervical region has demonstrated vagal influence as measured by heart rate variability (10). This same decompression can be achieved by dry needling of the subocciptal muscles trigger points as previously mentioned

Upon exiting, the vagus nerve is housed in the carotid sheath, a fibrous connective tissue surrounding the vascular compartment of the neck. This is part of the deep cervical fascia of the neck, which includes the investing layer, facscial tissue encompassing the upper trapezius and SCM muscle. Other than there primary biomechanical functions, these are accessory breathing muscles. As diaphragm function diminishes, these muscles along with others, i.e. pectoralis, levator scapula, will compensate for the diaphragm’s weakness and increase their firing. Treating these muscles can restore their proper tone, decreasing negative postural influences and possibly eliminates any impact of facial distortion on the vagus nerve.

The third basic function of the diaphragm involves lumbar stability by aiding in regulating intra-abdominal pressure (IAP) in concert with the abdominal muscles and pelvic diaphragm, to stiffen the trunk and prevent tissue strain or failure from buckling (11). These muscles are coordinated not only through motor control through a feed forward pattern but are intricately connected by the thoracolumbar fascia (TLF).

When examining fascia, “emphasis is placed on recognizing its continuity between regions and understanding its key role in coordinating muscular activity by acting as a body-wide proprioceptive organ. Its force can be transmitted to other muscles, tendons, joints, joint capsules and ligaments strategic mechanical and coordinating role in musculoskeletal function”(12).

The diaphragm’s is no exception. Bound primarily by four distinct fascial tissues, 6 each attaches to muscles critical to core stability (for the purpose of this article we are not focusing on its connections with the viscera or circulatory system). The interfascial plane attaches to the diaphragm’s posterior portion, joining to the psoas and quadratus lumborum. The quadratus lumborum associated with the diaphragm is mainly connected to L2, and this contact is supported by the lateral raphe (this is the second fascial plane) (7). The diaphragm acts mainly on L2 in order to stabilize the lumbar column and to control the resulting forces properly (7), along with the spinal extensors and abdominal muscles, it stabilizes the punctum fixum for the psoas (4).  Dry needling of the QL and psoas, along with L2 multifidus and its reaches to L1 and L3 levels, offers another possibility to reestablishing diaphragmatic integrity.

The fascia transveraslis is strongly attached to the transverse abdominus muscle (trA). Also, as part of the TLF, it sends slips of its tendons into the diaphragm thus influencing it indirectly by any TLF contraction; the reverse is also true. Both act in concert along with the pelvic floor muscles and abdominal muscles to regulate IAP. The TLF anterior layer has been described as being an extension of the transversalis fascia (13). Derived from the endothoracic fascia, originating in the deep and median cervical fascia, including the scalene muscles and the phrenic nerve it is related to the diaphragm (7). Here we get a glimpse of how distal connections can influence the diaphragm from varied perspectives.

The final fascial plane is the TLF. While its full involvement is beyond the scope of this article, its impact on the diaphragm should not be minimized or overlooked. Its extension covers vast territory ranging from the sacrotuberous ligaments and sacroiliac joints through the pelvic and spinal musculature, connecting them to both axial and extremity musculature not directly bound by its lumbar belt, i.e. rhomboids, trapezius, semipinalis capitis and splenius capitis, eventually anchoring in the cranial base.  Observing compensatory functioning of these muscles often lead us back to the diaphragms’ inability to maintain sagittal stabilization that forced these unhealthy, adaptive neuromuscular patterns to protect the body’s stability and integrity.

With part of the diaphragm’s origin stemming from L1, L2, and L3, (and previously we addressed the importance of the L2 level for stabilization), dry needling the deep paraspinal muscles of these areas, i.e. multifidus, in conjunction with gorilla breathing as described by McGill (10) or breathing technique as outlined in Dynamic Neuromuscular Stabilization can bring about substantial changes. Please be careful when assisting the patient with this approach. Some may find a full breath too uncomfortable. Please have them operate within their limits of tolerance, without compromising technique.