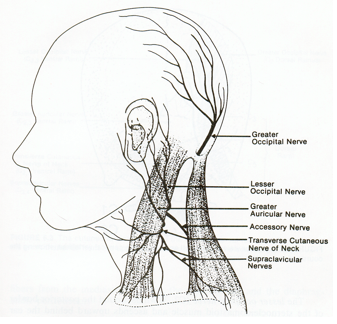 The Suboccipitals and Greater Occipital Nerve

I began this piece a while ago as part of a needling atlas that I was going to co author with one of my mentors, Dr Martha Lucas. The project proved to be more of a task than either of us realized, but some great information came out of it and I am passing some of that along to you here. This is a lengthy post, as the material is quite dense, so hang in there!

As needlers, we often see patients with headaches and that often leads us to the suboccipital muscles. They have a trigger point referral in what I like to call “the sunglass pattern”, 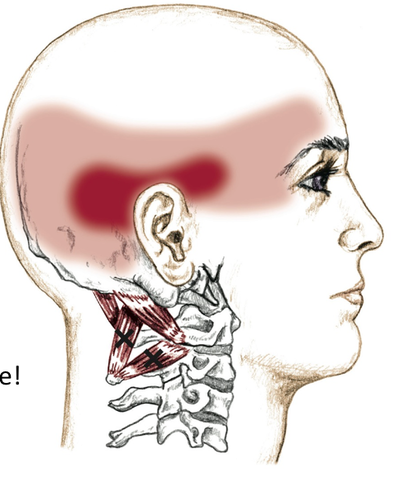 mostly over the ears, rather that in the suboccipital area, as most think they do. There are other muscles that can have a trigger point referrals suboccipitally, like the SCM and splenius cervicis. Remember there is more to needling than trigger points, and other structures and muscles in the area can have a sclerotogenous referral as well. 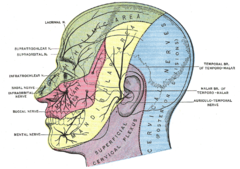 The suboccipital musculature can be dysfunctional, causing pathomechanics and resulting in suboccipital pain and the greater occipital nerve can become compressed and cause pain in the suboccipital region with referral to the vertex of the head (1). 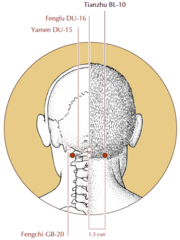 As a side point, the Greater Occipital Nerve (GON) also corresponds to a commonly used acupuncture point: BL10, located on the lateral aspect of the trapezius muscle, approximately 4.5 cm lateral to midline approximately 1.5 cm beneath the EOP in a depression within the hairline

The greater occipital nerve (GON) is located at the base of the occipital region, 2-3cm from midline, where it pierces the trapezius, or just laterally at the fibrotendonous arch between the trapezius, splenius capitus and SCM. It is implicated in head pain, headaches and diziness, especially due to entrapment.

C1 has no cutaneous innervation. It divides within the spinal canal to form its dorsal and ventral rami. The ventral rami descends and joins the cervical plexus; the dorsal rami passes over the posterior arch of the atlas to supply the suboccipital muscles of the neck, the rectus capitus posterior major and minor and the obliquiis capitus inferior and superior.

The C2 spinal nerve emerges from between the posterior arch of atlas and lamina of axis, under the obliqus capitis inferior and divides into a small ventral ramus and larger dorsal ramus (2,3) . The ventral ramus descends to join the cervical plexus. The dorsal ramus divides into medial and lateral branches. The medial branch is much larger, approximately 3.5mm (3 ) and becomes the greater occipital nerve; the lateral branch supplies the paraspinal neck muscles (splenius, longissimus and semispinalis capitis).

then passes between the posterior arch of atlas and inferior oblique, curves upward (deep to the trapezius) and then pierces the semispinalis approximately 2 cm superior to the intermastoid line (3-5 ) Here it emerges under the tendinous sling formed by the trapezius medially and sternocleidomastod laterally (3-6 ). It is then joined by a filament from the medial branch of the dorsal ramus of the third cervical and becomes subcutaneous 2-4 cm lateral and slightly below the external occipital protruberence (7-9 ) and medial to the occipital artery (9) where it courses up the posterior occiput and parietal bones to supply the posterior head and scalp.

Compression by extreme rotary movement of the neck combined with hyperextension is proposed as an etiological factor by Davis (10) and if there is history of such, it should be considered a principal component in the differential diagnosis. Whiplash trauma and compression where the GON exits the semispinalis and trapezius is also supported by Kuhn (11 ) and may actually represent a compression neuropathy of C2.

Davis (10) also cautions atlantoaxial degenerative joint disease be investigated as an associated etiology. Spondylosis, arthritis of the upper cervical facet joints and pathological thickening of the cervical ligaments has also been cited by others (12,13)

Katz (14) describes compression of the greater occipital nerve (C2) by the trapezius and the lesser occipital nerve (C2-3) by the sternocleidomastoideus muscles as “very common” in neck injuries, citing that both are superficial and direct trauma or microtrauma (repetitive motion over time) will cause muscle spasm or tightening that will irritate the nerve. 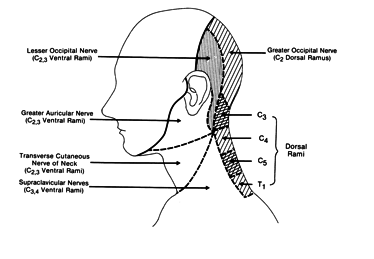 The 1st order neurons of the pain pathway travel from the peripheral distribution of the greater occipital nerve and synapse in lamina 1-4 of Rexed in the dorsal horn of the cervical spinal cord. Here, the information can travel up or down a few levels via propriospinal pathways before they synapse on 2nd order neurons which immediately decussate and travel up the lateral funiculus in the spinothalamic pathway. The upper 3-4 cervical neuromeres share a common 2nd order neuron with the spinal tract of the trigeminal nerve, and because of convergence (1, 17,18), nociceptive afferentation from the upper 3-4 cervical levels may be sometimes indistinguishable from that of trigeminal origin and vice versa(19).

Stimulation of the greater occipital nerve has been shown to produce excitation of second order neurons in the trigeminocervical complex. Given that neck pain is very common in primary headache disorders, this convergent excitation may play a role in pain referral from cervical structures (1).

Axon collaterals from these nociceptive afferents travel to the ventral horn to synapse on interneurons and gamma moto neurons, changing the central integrated state of the interneuronal pool and bringing the gamma moto neurons that much closer to threshold, which could conceivably increase spindle sensitivity. Collaterals synapsing on the intermediate cell column (lateral horn) could conceivably increase sympathetic drive and cause local vasodilatory and glandular responses and possibly assist in immune system activation via neurohumoral mechanisms.

The cervical paraspinal muscles have a high density of muscle spindles paired and in tandem configurations (20) as well as joint mechanoreceptors (21,22) which are believed to contribute to vertigo and nystagmus via connections with the brainstem and CNS (20-23)

34 or 36 gauge needle, 15-20 mm in length, perpendicular insertion for all except the obliquus capitis inferior, which will be oblique, from medial to lateral (28,29).

When you are needling, you wil need to be cognizant of the muscle layers. Near the occiput, you will have the trapezius and semispinalis capitis to pierce through. As you move laterally, you may be going through the SCM and splenius capitis. The posterior atlanto occipital membrane lies below these, with the dura and dorsal aspect of the cord just beneath that so exercise caution. The vertebral artery lies at the inferior and lateral aspect of this membrane, along the lamina of the axis, coursing up to travel around the posterior arch of the atlas within the suboccipital triangle.

OK. Enough for one evening : )