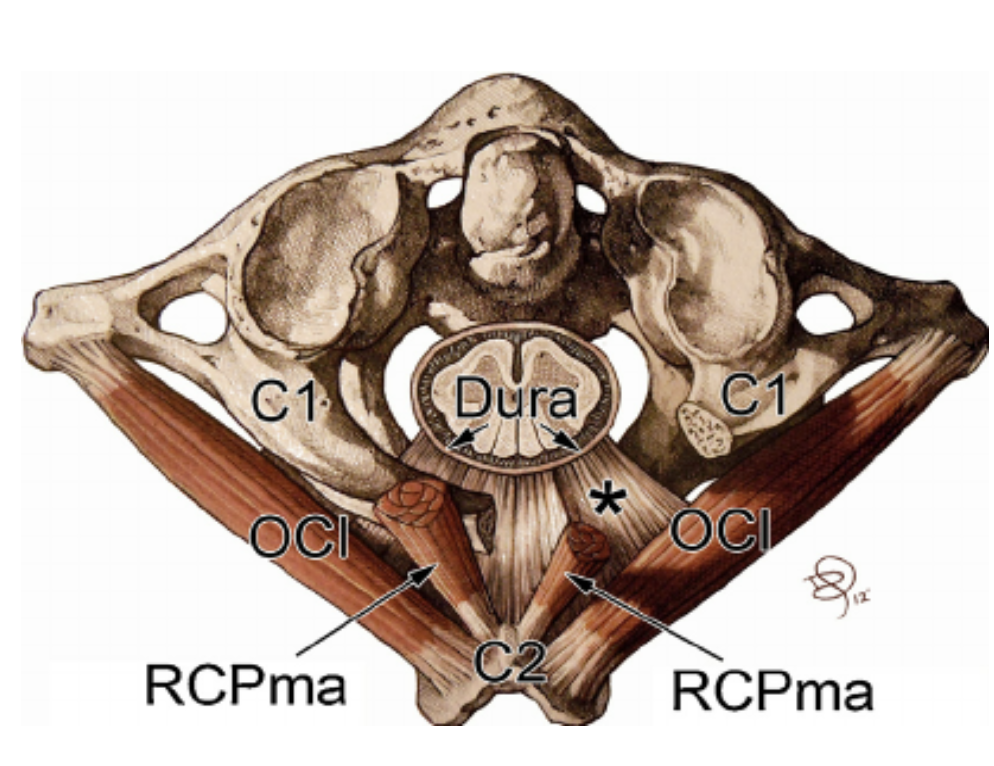 Once again, we are happy to have Dr Peritz write an excellent follow up to his last article (in case you missed it, click here). The next time you have a patient with an upper cervical problem, refer back to this article and think of all the far reaching implications of this often overlooked group.

The sub-occipital muscles (SOM) are compromised of four muscles, whose origins and attachments are bound to the atlas, axis and occiput:

Many people feel needling the OCI difficult and risky. Knowing your anatomy and where your needle is at all times makes it much easier

The complex integrative mechanisms involved in head-eye coordination probably demands complex proprioceptive inputs from the neck muscles which probably is the reason for their high spindle content.”(1)

Having a mix of fast and slow fibers, “the fast fibers appear to be well suited for fast phasic head movement such as small orienting movements or gaze shifts” while the slower fibers “play a role in repositioning the skull either to complement or compensate for the change in neck posture resulting from reorientation from lower cervical column.” (2)

More than their direct biomechanical affects, it is well established these muscles serve to assist in posture, balance, and locomotion, verified by “dizziness and ataxia follow damage or anesthesia of neck muscles, from whiplash injuries, from altered cervical blood flow, or from disturbances of cervical sympathetic tone." (1)

Observations of Bexander and Hodges “provide evidence of redistribution of activity between neck muscles during cervical rotation and increased interaction between eye and neck muscle activity in people with WAD (whiplash associated disorders). These changes in cervico-ocular coordination may underlie clinical symptoms reported by people with WAD that involve visual deficits and changes in function during cervical rotation such as postural control.” (3) Furthering its proprioceptive influences McPartland, Brodeur and Hallgren suggested a “relationship between chronic pain, somatic dysfunction, muscle atrophy and standing balance”. (4)

Use of dry needling to relieve trigger points (TPs) pain and restore muscle function has been elaborated in a previous blog describing neurological influences and implications of the SOM. But the extent of dry needling’s influences may reach even further than elaborated.

Back in 1995, Hack et al discovered in their dissection of the suboccipital region a fascial link between the rectus capitis minor muscle and the dorsal spinal dura. Their original conjecture was this connective tissue may help prevent dural enfolding during head and neck extension. (5) More recent studies have described “myodural communications bridging the epidural spaces between the rectus capitis posterior minor (RCPmi), rectus capitis posterior major (RCPma), and obliquus capitis inferior (OCI) suboccipital muscles and the dura mater of the cervical spine.” (6) 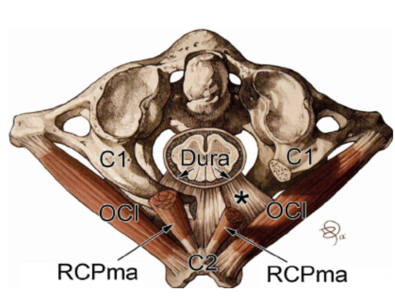 These soft tissue connections between the SOM and the dura are currently being studied.  Their affiliation with cervicogenic headaches as Alix and Bates suggest, “The dura-muscular, dura-ligamentous connections in the upper cervical spine and occipital areas may provide anatomic and physiologic answers to the cause of the cervicogenic headache.” (8) Others follow suit, suggesting, “increased tension within suboccipital muscles may produce abnormal traction on the dura, stimulating dural nociceptive fibers with resultant head pain, even in the absence of pathology. (7)

Following through with this correlative, dry needling’s influence in re-establishing proper muscle tonicity and pre-synaptic inhibition is well documented. Adding to these phenomenon is dry needling’s impact on fascial connections via “mechanical transduction” (9) as outlined by Langevin. Her research readily outlines how the application of a needle to soft tissue has multiple downstream effects both biochemically and structurally including “cell secretion, modification of extracellular matrix, amplification and propagation of the signal along connective tissue planes, and modulation of afferent sensory input via changes in the connective tissue milieu.” (9) Given this understanding, the dispersal effect of needling has direct communication with the dura, most likely influencing dural membrane tension.

The following seems to allude to the aforementioned,“ The regulation of tension across the myodural bridge as a spinal cord stabilizer may prevent dural enfolding, reducing stimulation of nociceptive pain mechanisms. Hypertrophy of suboccipital muscles or a failure of this system to maintain constant tension, may result in clinical manifestations arising from increased dural tension.” (6)

Numerous authors agree the myodural connective tissue prevents enfolding of the dura, thus stabilizing the spine. However the mechanism(s) are not fully agreed upon. Some postulate a myotatic reflex of the SOM. Another proposal is the connective tissue structure of the fascia is oriented to resist hyperextension and compressive enfolding of the dura .(10) “Rutten reported on high muscle spindle content in the RCPmi, postulating that the myodural bridges may function to monitor stresses on the cervical dura mater, reflexively preventing enfolding.” (6)

Most likely all of these come into play.

More specific to the dura’s non-mechanical influences, as part of Enix, Scali and Pontell’s conclusion, they proffer a compromise of this system could result in altering cerebrospinal fluid (CSF) flow. (6) We find support for this position in a recently published study discovering, “CSF flow waveform parameters at craniocervical junction were analyzed. The results showed that, after the head rotations, the maximum and average CSF flow rates during ventricular diastole were significantly increased, and the CSF stroke volumes during diastole and during entire cardiac cycle were significantly increased. This suggested that the CSF flow was significantly promoted by head movements.” (11) Add to this, “Myodural biofeedback may play a role in maintaining the integrity of the subarachnoid space.” (6) and we begin to understand alterations in SOM functioning noticeably influences CSF flow.

So when we consider dry needling therapy for the SOM region, we must keep in mind indicators well beyond those of TP patterns, localized pain and limited ROM. Anything directing our intention towards changes in CSF flow, alterations in sensorimotor function, cervicocephalic headaches, and dural related pathologies must be considered in any thorough evaluation.