A primary descender of the 1st ray

Look at this beautiful muscle in a foot that has not yet been exposed to hard planar surfaces and shoes that limit or alter motion! 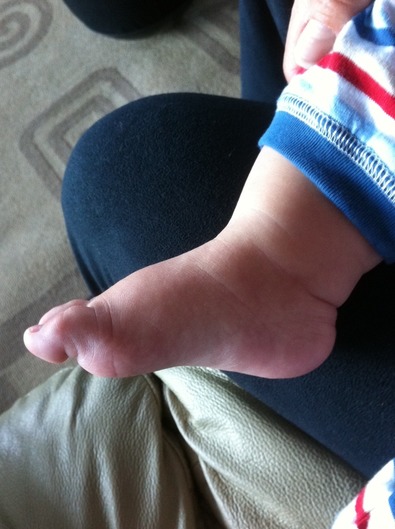 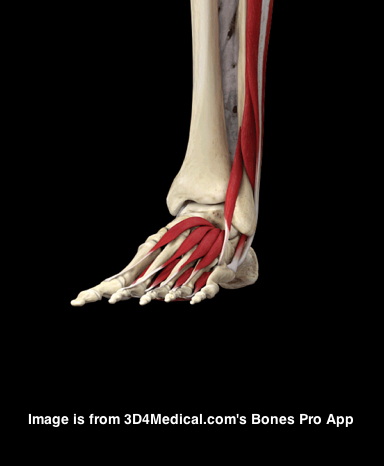 The Extensor Hallicus Brevis, or EHB  (beautifully pictured above causing the  extension (dorsiflexion) of the my son's proximal big toe) is an important muscle for descending the distal aspect of the 1st ray complex (1st metatarsal and medial cunieform) as well as extending the 1st metatarsophalangeal joint. It is in part responsible for affixing the medial tripod of the foot to the ground.  Its motion is generally triplanar, with the position being 45 degrees from the saggital (midline) plane and 45 degrees from the frontal (coronal) plane, angled medially, which places it almost parallel with the transverse plane (1). With pronation, it is believed to favor adduction (click here for reference).

It arises from the anterior calcaneus and inserts on the dorsal aspect of the proximal phalynx. It is that quarter dollar sized fleshy protruding, mass on the lateral aspect of the dorsal foot.  The EHB is the upper part of that mass. It is innervated by the lateral portion of one of the terminal branches of the deep peronel nerve (S1, S2), which happens to be the same as the extensor digitorum brevis (EDB), which is why some sources believe it is actually the medial part of that muscle. It appears to fire from loading response to nearly toe off, just like the EDB; another reason it may phylogenetically represent an extension of the same muscle.

Because the tendon travels behind the axis of rotation of the 1st metatarsal phalangeal joint, in addition to providing extension of the proximal phalynx of the hallux (as seen in the child above), it can also provide a downward moment on the distal 1st metatarsal (when properly coupled to and temporally sequenced with the flexor hallicus brevis and longus), assisting in formation of the foot tripod we have all come to love (the head of the 1st met, the head of the 5th met and the calcaneus).

Since this muscle is frequently dysfunctional, and is one of THE muscles than can lower the head of the 1st metatarsal, along with the pernoeus longus and most likely the tibialis posterior (through its attachment to the 1st or medial cunieform), needling can often assist in normalizing function and works especially well, when coupled with an appropriate rehab program (another post on that later). Here is one way to needle it effectively.

Wow, all that from one little muscle! Don't overlook the foot intrinsics. A little needling can go a long way : )

Needling the Extensor Hallucis Brevis from Ivo Waerlop on Vimeo.